So finally after months of training, the weekend for the 2015 Chiltern Way 214k/100k races arrived.

Saturday morning the 214k runners started the race 9am prompt followed on the Sunday by the 100k runners at 7am.

The Chiltern way is an AONB a circular route of 214km (134 miles) which is mainly trail from wet grass, ploughed fields, rocky roads and the occasional tarmac path and road when passing through villages and some towns. The route goes from Hemel Hempstead, Chalfont St Giles, the edge of Marlow, Hambleden, Bix Bottom, Ewelme, the Ridgeway, Stokenchurch, Great Hampden, Aldbury, the Dunstable Downs, Sharpenhoe Clappers to Harpenden and back to Hemel Hempstead, it has approximately 5000ft of ascent, so pretty tough!

I had entered the 100k, not because I was chicken for not entering the 214k (well, ok I was a little considering only one person finished the 214k previously!) but I wanted to seek revenge after my dismal run the last year where I got hopelessly lost and added about another twenty miles to it, I did eventually finish it though- in last place!

Saturday afternoon I prepared all my gear making sure that I had everything on the mandatory kit list and triple checked it, I know that if anything is missing, Lindley Chambers (Race Director Challenge Running) wouldn’t hesitate to refuse to allow you to compete, the kit required is after all for our own safety and he does scare me especially now he has a grizzly Adams beard!

So after I was satisfied I had everything ready, I settled down for the evening, large pasta dinner, cup of tea and early to bed ready for 5:00 am alarm call!

I didn’t really sleep much and eventually the alarm went off. Got up had breakfast, lubed up, nipple’s taped and anywhere else I could lube or tape that I could think to reduce any chance of the dreaded chaffing/blistering and I was off to Felden Lodge, Hemel Hempstead.

we had to be there for around 6am to get kit checked, given maps (did I mention that there was navigation? So map reading skills would be advisable, hence me last year getting lost!), race number and then the race brief around 6:30am. I checked in on arrival, had my kit checked and everything checked out phew!

Soon the other runners arrived: Jan Soderkvist, Gary Kelly and Sam Davis – a brave young lad who was attempting his first ultra-marathon (a small field but the races are still in their infancy and will grow). Unfortunately one other chap didn’t turn up or even contact Lindley, so we waited a short time for him, he still didn’t turn up so Lindley gave the race brief and he then drove us to the start which was located at the half way CP for the 214k race at Little Hampden. 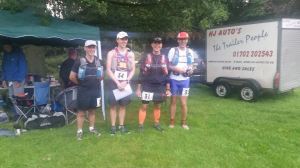 After the mandatory picture of the starters (Above), the minutes ticked down and then we were off!

We all started with a nice easy pace, having a natter and getting to know each other. For some reason the guys seemed to be following my lead, perhaps because I came with a Garmin Etrex 30 and had no intention to get lost this time, so they left navigation to me for a while. I’m afraid competition got the better of me and I started to creep away from the group, slightly picking up the pace and before long I had lost them. I entered a wood and followed the GPS but disaster I came out into a field which had been ploughed and there was no trodden path to see and my GPS seemed to go haywire! As I was cursing, out of the trees popped Jan, then Gary and Sam about 50 meters away from me, I knew Jan from a couple of races I’d entered before and his map reading skills are excellent, so I caught them up and we all ran together again for a while.

Eventually after about 8 miles in I was getting ahead of the group again, I’d manage to get the GPS working, plus I recognised some of the route from the previous year, I knew the first checkpoint wasn’t too far, in fact each were approximately 15 miles apart. Soon I reached the first CP and –there was nobody around?! Everything was laid out but missing the volunteers, so I helped myself to some food and water/coke and Brian appeared, he’d just popped up to the road to see if anyone was coming, and just missed me but no big deal it was great to see someone have a quick chat and get myself sorted, I didn’t stay long, thanked him and off I went, all the time thinking that Jan and his superior map reading skills was about to catch me up…

The next 15 miles were my favourite of the whole route, you pass Whipsnade zoo followed by Dunstable Downs, with some spectacular views and the local gliding club flying about overhead. I had a small detour at one point around a place called Bidwell, my gps route was saying to go one way and followed it to a dead end! I realised I would have to back track on myself as I had remembered that this was one of the places that I got lost the last year, but as I started heading back, I noticed a small road through some homes, I thought I’d follow that instead and came up to an impenetrable gate! I was tiring at this point and just wanted to get onto the road to get my bearings which I could see through the gate, luckily I spotted that I could climb a small tree to the side of the gate and jump over! No damage done to tree, gate or me so I carried on. I was starting to get paranoid again that Jan was going to catch me, I’d spent too long on the detour and with Jan’s superior map reading skills he’d be on me in no time!

I reached the checkpoint, which was good to see Lindley and crew, also I had managed to catch up with one of the 214k runners (Ed Jones) who was resting and fuelling up. I had my lunch comprising of a ham sandwich that I’d brought with me, washed down by two cups of sweet tea provided by the kind volunteers at the checkpoint, I also refilled my bottles and stocked up with some chocolates yum! 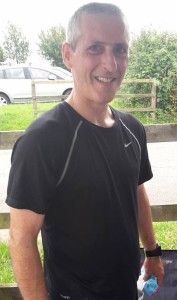 Off I went again, fuelled up and my moral boosted, I started to settle into a nice pace, after a few miles I noticed my left achilles and my right IT band was starting to ache, which was a little worrying as I had another 30 miles or so to go, I had to take some ibuprofen to try to reduce any inflammation, after about one hour it kicked in and the aches started to ease. Running around the outskirts of Luton was interesting, some nice views running through the Barton Hills Nature Reserve of Luton town and then around Luton Airport watching the planes take off and land was a bit surreal but took my mind of the aches starting to appear again. I reached the final checkpoint, had a quick rest and filled up, I was happy knowing that this was the final stretch and I could do this, I didn’t care about Jan or anyone else anymore, if they caught me fine, but if they didn’t perhaps I could actually win this race…

The pain in my IT Band and achillies was affecting me quite badly, I could run some but was having to walk quite a bit, I also felt drained of energy but I still plodded on. I reached Harpenden and I was absolutely gagging for a can of coke! I spotted a convenience store and as Lindley did say on his race briefing it was ok to pop in a get something to eat/drink as everyone would have the same opportunity, so I grabbed a coke and downed it in one! What a boost! I just seemed to get a surge of energy and for another 5 miles I was on a high!

Light was starting to fade, it was light enough in the open but in the woods a little dark so I opted to put on my headtorch, I kept going knowing that soon I’d reach the outskirts of Hemel Hempstead and before long I could see the street lights. I reached the final couple of miles, when in front of me I could see another runner, it was the leader of the 214k race – Dan Connors! I’d managed to catch him up but only because he’d made a small navigational error, which cost him around twenty minutes. I caught him up, had a quick chat and tried to give him a boost, but I think pride got to him, he was off and I tried to keep up for a little but somehow he managed to get that reserve of energy and kept ahead of me until the finish, all credit to him that was awesome! (Lindley thanked me for letting him win, but I’ll own up – I couldn’t keep up with him!). I’d finished the 100k in first place and Jan didn’t catch me, I’d won my first ever Ultra marathon!

Ed Jones finished the 214k race in second place, all other runners unfortunately DNF but all credit to them for trying.

I’d like to thank Lindley for organising these awesome races and a special thanks to his wonderful small army of volunteers – you rock!

My Race vest I won 🙂

I'm a 40 something short bloke with an interest in running stupid distances. View all posts by MikeAbel